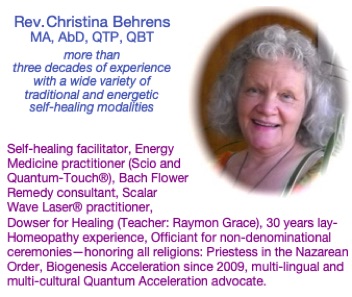 I am a force of the violet flame,

more powerful than anything

My website is now “Quantum Acceleration” because whenever one embarks on the journey of self-healing, whether in body, mind or spirit, one is inviting acceleration of one’s personal evolution, and consequently, the acceleration of positive energy on the planet. This website is a tribute to the many teachers I have been blessed with along my path. Some are in the Spirit now. Reverend Betty, Maharishi Mahesh Yogi, Guru Maharaji, Paramahansa Yogananda, Doctor Prakash Mehta, Doctor Edward Bach, Sheikh Hazrat Azad Rasool of the Naqshbandi-Mujaddadi Order of Sufis, Sheikh A.R. Rashid, Raymon Grace, Quantum-Touch practitioners and teachers, Beth Roberts-Evason of Angelwalkers, Spiritual Advisor and Medium Alrena, Dr. Ginger Bowler, Ascended Master Lantos, Malku Robert Martin of the Ancient and Sovereign Order of Melchizedek, Bill W., Sri Eknath Easwaran,  my Higher Power, and many others.

My first experience with Energy Healing occurred at age 21, through the intermediary of a “Faith Healer” in a spiritualist church--my acute Bronchitis was healed in seconds. I used Reverend Betty’s channeled healing boards and attended her sessions for several years. Her clarity, faith and devotion were a true inspiration to me. After many journeys of spiritual discovery, I moved to an intentional spiritual community at the age of 28. One of my first responsibilities was to be the self-healing facilitator for a community of sixty people of all ages. I received my training and experience in Homeopathy from Dr. Pakash Mehta in his annual visits from India, and was responsible for following up with his prescriptions for all the members of this community. Bach Flower Remedies were also revealed as a profoundly effective tool for physical and spiritual evolution.

I moved nearby in 2004, primarily to have the freedom to pursue other avenues of self-healing. I discovered the efficacy of Quantum-Touch® in 2005, and became certified in this “Supercharged Reiki” practice. I then embraced Dowsing for Healing with Ramon Grace in 2006, and took several seminars. I founded the Blue Ridge Dowsing Society and facilitated monthly sessions in which members practiced dowsing for healing, for situations, others and for themselves.

My journey expanded in 2008, discovering the vast potential of Quantum Biofeedback, Scalar-Wave Laser and Biogenesis. I also pursued studies in the principles of the Ancient Order of Melchizedek, and became ordained as a Priestess in the Nazarean Order in 2011. Jeshua Ibn Yussef (Jesus) was High Priest of this order, which honors all religions. The Temple of Melchizedek represents these teachings at this time. As a Priestess of this Order, I have the privilege of potentizing love on the planet, through those who choose my facilitation of ceremony of many kinds.